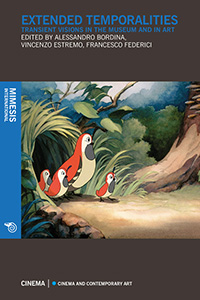 This book contains a series of reflections on the theme of temporalities in cinema in the world of art. They do so interweaving various paths, and various structures, in order to arrive at different destination points. Which temporalities, one may wonder. On the boundary between cinema and contemporary art, where boundaries actually no longer exist, the idea of temporality is affected by paths opened up in historical moments which are actually so recent as to be simply in front of our eyes. Video, for example, derived from television, has since been “overtaken” by the digital evolution, yet does not relinquish its domestic function: it re-creates itself in new forms. The same also applies to cinema. Art is certainly not limited to this, but, since it is determined by its technical form, in this it continually finds essence and continuity: thus a temporality emerges which is determined by technology and by technological change. Just as with the temporality determined by the spectator’s viewing experience, it reveals itself as being, in part, the personal essence of the subject. Therefore they are extended temporalities, since they are determined by the unique and unrepeatable combination of the length as predicted by the creator of the work, and the unpredictable time management of the observer of the work, sometimes bored, thoughtful, concentrated, patient… An extendable temporality.

Alessandro Bordina is Postdoc Research Fellow at the University of Udine, where he teaches Video Restoration. Among his publications: Oui, c’est du cinema/Yes, It’s Cinema (edited with Philippe Dubois and Lucia Ramos Monteiro, 2009) and L’archivio / The archive (edited with Sonia Campanini and Andrea Mariani, 2001).

Vincenzo Estremo has been awarded at the festival Iceberg 2009 as young writer and he has won with a collection of short stories: Omero e altri uomini illustri, published by Pendragon. He is Ph.D. candidate at the University of Udine and Kunstuniversität Linz in the Department of Time-based Media and he is guest lecturer at MA Visual Arts & Curatorial Studies, NABA, Milan, where is giving seminars about curatorship and moving images. He is chief editor for Droste Effect Magazine and regular contributor for Arte&Critica, Juliet and Camera Austria.

Francesco Federici holds an International Ph.D. in Audiovisual Studies from the University of Udine in collaboration with Université Sorbonne Nouvelle – Paris 3. His research is focused on the relationship between cinema, video art and spectatorship issues, studying the relations between the cinematic viewer and the space that surrounds him. On this topic he recently edited Cinema and Art as Archive: Medium, Form, Memory (with Cosetta Saba, Milan 2014). He teaches Art History and Theory at the École supérieure d’art du Nord-Pas de Calais/Dunkerque-Tourcoing.