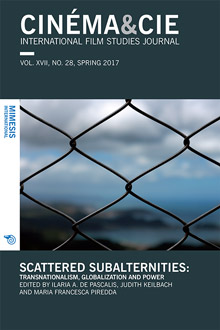 Who is the Subaltern in the current global frame? Has neoliberalism changed the experience of subalternity? How do subalterns write history and what kind of history is written about subalternity? Cinéma&Cie’s special issue addresses these and other questions through various theoretical approaches. The essays argue for the importance of a multidisciplinary perspective and address issues of media representation from a variety of perspectives, such as visual culture, history, philosophy, and postcolonialism. They focus on contemporary subalternity, and especially on the migrant – characterized by diaspora and condemned to invisibility by hegemonic power – and the postcolonial subaltern – who has now the possibility to express her/ himself in unexpected ways, in particular by using new media. The scattering and pervasiveness of media devices and gazes is discussed in depth in these essays, which delve into the dialectic between subaltern cultures and agency embodied in the subjects of representation.

Ulrike Mothes, Video Memories of Diaspora: Searching for Identity in Between Homelands

Maja Figge, ‘Actions of the Eyes of the Fleeing’? Reflections on the In/Visibility of Harraga Videos

Sudeep Dasgupta, The Aesthetics of Indirection: Intermittent Adjacencies and Subaltern Presences at the Borders of Europe

Anu Thapa, Framing the Subaltern: The Reemergence of the ‘Other’ in Neoliberal Indian Popular Cinema

Renato Loriga, A Revolution in Time: History and Identity in Raya Martin’s Autohystoria

Farah Polato, Where Are My Houses?

Angela Bianca Saponari, The Modernist Roots of the Mind-Game Film: The Example of an Italian Puzzle