Send us your book proposal at: inquiries @ mimesisinternational.com

The Public Sphere and the Populist Challenge 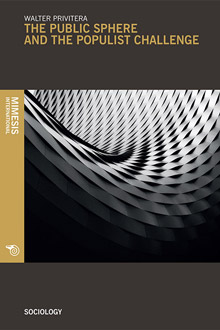 In the sixties and seventies the public spheres in Western countries were places of critique. Various kinds of social movements democratised institutions and political culture. Today neoliberal politics and populist movements have transformed these arenas into theatres of real challenge to democracy. The outcome of this challenge will depend on how democratic political actors make their presence felt in the public sphere.

Walter Privitera is Associate Professor of Sociology at the University of Milan-Bicocca. He works in the areas of cultural sociology and social theory. Current primary research interests include the public sphere, theories of individualisation as well as Europe and its changes. His most recent books are Tecnica, individuo e società (2004), Sfera pubblica e democratizzazione (2012), Gli usi della sfera pubblica (2012).

THE PUBLIC SPHERE A COMPLEX CONCEPT

1. THE IDEA OF THE PUBLIC SPHERE

The Arrival of Textuality: The Media

2. THE PUBLIC SPHERE IN HABERMAS. A THEORETICAL JOURNEY

The Theory of Communicative Action

Constitutional State and Democracy: Between Facts and Norms

Uses of the Public Sphere

3. THE MEDIATISED PUBLIC SPHERE AND THE POPULIST CHALLENGE

Some Particular Characteristics of the Responsive Public Sphere

Origins of the Crisis: The Concealed Neoliberalism of German Politics

The Great Cover-up: “Round up the usual suspects”

The New Hegemonic Discourse in German

Montesquieu: An Introduction. A Universal Mind for a Universal Science of Political-legal SystemsRelations. Ontology And Philosophy Of Religion