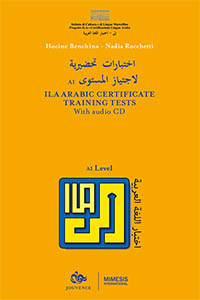 ILA project offers for the first time tests and preparation materials for the Certificate Exam in Modern Standard Arabic (MSA), the language used in international context and the one in which Arabic speakers identify themselves from a cultural perspective. ILA project interpreted criteria and standards established and recognized by the EU through CEFR, a suitable tool to certify languages on its territory. This book is part of the project first step and focuses on oral skills, which imply the ability to organize linguistic means at a higher level than the one necessary for writing skills.

Hocine Benchina, professor of Arabic Language, has been teaching Arabic at Johns Hopkins University and Università degli Studi di Milano. Currently he is a language consultant at Eni Corporate University. In 2011 he was awarded the Custodian of the Two Holy Mosques International Award for Translation.

Nadia Rocchetti, professor of Arabic Language and Literature, translator, focuses her research on Arabic teaching and curricula development. After her university studies in Italy, she went on to improve her skills in Syria, Lebanon and Egypt.